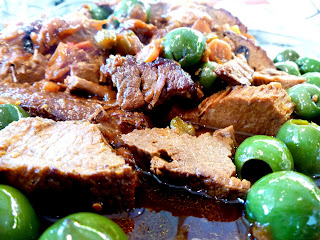 I have never successfully made a brisket before.  The time involved always
scared me off.  The one or two times I attempted it, I never got the crucial
step until I read this book, Jewish Cooking in America by Joan Nathan, and
realized that it was a step repeated in almost all the recipes listed in the
book-- it's a great read other than the recipes by the way.  The kids loved
this dish, too--olives included. (okay we had to dare Leo to eat one and if
he didn't like it we'd give him a dollar, he said he liked it just fine--we
gave him the dollar anyway.)
If I were to do it for guests I would do the first 2 parts the night before and finish it up just before guests arrived to make the timing easier.  When I made this earlier in the month, I started at 9:30 with the first part, did the 2nd at about 1:30, then started the final part at 4:30 to get the dinner on the table by 5:45 so Steve could get to a meeting at 6:30.

Moroccan Brisket with Olives from Jewish Cooking in America:

1 5-6 lb. brisket of beef, Marin Sun Farms or any grass-fed pasture raised beef
Salt and pepper to taste
2 cloves garlic, peeled and halved
1/4 cup olive oil
1/4 tsp. turmeric or a few strands of saffron
1 tsp. fresh grated ginger
2 large Spanish onions (the white ones)
1/4 cup chopped celery with leaves
1 small carrot, peeled and sliced in paper-thin rounds
2 large fresh tomatoes peeled and diced
1 lb. green olives (I got these at the olive bar at Whole Foods and only
used 1/2 lb. which was plenty.  I chose the least seasoned green olive and
got the pitted ones, it was very simple)
1/2 cup water
Juice of 1 lemon

Part 1: Preheat the oven to 350. Sprinkle the brisket with salt and pepper
and rub in the garlic.  Sear the meat on all sides in a little bit of the
olive oil in a heavy roasting pan or Dutch oven with a cover.  Remove the
meat from the pan and turn the heat down.  Add the remaining olive oil,
turmeric or saffron, ginger and onions and sauté until limp.  Add the celery
and carrots and sauté a few minutes more.  Finally, add the tomatoes and
mix.  Remove about a third of the mixture and place the brisket back on top
of the mixture already in the pan and cover with the remaining mixture.
(This process should take no more than 30 min.)
Cover the pan and put everything in the oven for about 3 hours or until the
fork goes in and out easily.

Part 2:  REMOVE and REFRIGERATE (this was that crucial step I was talking
about).  It should get cold--mine was still a touch warm when I needed to
get going on it so I would count on refrigerating for at least 4 hours.

Part 3:  A few minutes before you pull the meat from the fridge, put the
pitted olives in a pan and cover with water and boil on the stove for a
couple of minutes.  Drain, rinse and repeat.  This will remove some of the
saltiness and really make the olives fruitier.  Take the brisket out of the
pan, remove any fat that has congealed, and slice against the grain.  Return
to the heavy pan covering with the reserved onion mixture.  Squeeze the
lemon and add the water--sprinkle the olives over the sliced brisket and put
back in the oven for another hour and a half, braising the meat at least once during the cooking time and serve.
Posted by Unknown at 11:55 AM