This morning Steve and I are talking about the liver dish and all the stuff that goes with it and Sophia walks into the kitchen and listens to what we are saying.  She then declares:  "Liver and onions?!  That's disgusting.   I'd NEVER eat that, that's just bleccch."
Steve and I just look at her, "So, you'd never eat that, huh?" 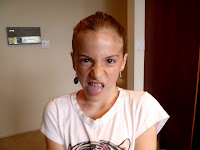 "No, it's gross!"
"Okay, then."
Should I feel a little guilty about not letting her know that the "special steak" she had seconds on the other night was exactly that?  I don't know, we probably will at some point.  The whole scene just reminded me of exactly how strong the perceptions of reality we all live in are really not all that concrete.  There are so many things I was sure I would never do in my life and yet, all the impossible things are not so improbable any more to me.
Posted by Unknown at 10:46 AM 1 comment: 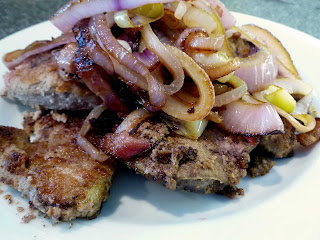 I have never cooked liver in my life.  I think my mom made it once for us way back in the 70's and the dish was never repeated.  I may have tasted a bite of my friend, Amy's, once in the 90's at a restaurant and I never had the desire to repeat that either.  She swore it was one of her favorite things to eat growing up.  Lately, though, I've been dancing around the idea of organ meats.  I've been reading about how great they are for you and have even added an "offal" pack to the new meat CSA I just signed up with.   Then Peter Defty from Vespa planted a bug in Steve's ear about how he should start eating it, loudly echoed by our Crossfit coach, Marcus Filly, and then all I heard for a week from Steve was how he wanted liver.  So, the Crane family is going for it.

I got my calf's liver this time from Prather Ranch--make sure you get yours from a pasture raised animal and that it's from a juvenile, I hear the older the cow the stronger the taste.  I was nervous to cook this, Steve kept asking me questions about it and I finally had to have him leave the kitchen, he was bugging me.  The kids were the biggest surprise.  We told them it was "special steak", something we'd only get about once a month.  Sophia cleaned her plate and asked for seconds.  Steve and I were dumbfounded.  Leo ate his too but was fine with just the one serving.  Oddly, Steve was the last to finish--an almost unheard of phenomenon--but he did have seconds.  So, here's the liver recipe I pulled together from various methods and sources:

Cook off the bacon on a skillet or in an oven at 425 for 12-15 min.  Strain the bacon fat and set aside.  I did this in the morning with a 12 oz. package of bacon and saved 3 slices for later in the evening.  The bacon fat I just kept in the fridge until later that day.

A few hours before you want to serve marinate the liver in the lemon juice and enough coconut milk to cover the liver pieces completely.

In a shallow bowl combine the coconut flour and salt and pepper.  Set aside.

In either the lard or butter and olive oil saute the separated rings until soft and golden, about 20 minutes.  Add the bacon, and keep warm in a separate bowl.  In the same skillet, add some more of the fat and heat to high.  Dredge the liver pieces in the flour and saute on both sides until golden and the liver feels firm when you press on it.  Not stiff as a board, but firm.  About 5 minutes a side.

Serve with onions strewn on top.

Notes:  I read in several places that soaking in milk was the key to taking some of the metallic taste out of the liver.  Sally Fallon, in Nourishing Traditions, recommended using the lemon juice, so I thought I'd combine both methods.  Maybe it was overkill but I wasn't going to take any chances.  It worked out great.  You can use regular cow's milk (organic whole or even heavy cream) if you want but we're dairy allergic.  I had maybe two bites that tasted like pate, but overall the experience wasn't bad.  I'll be repeating this one...

Posted by Unknown at 3:32 PM No comments: 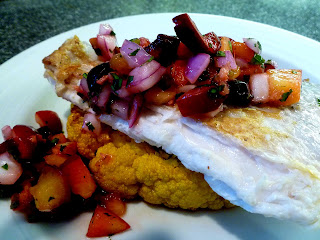 Stone Fruit is starting to make an appearance at the Farmer's Market this week--I've noticed them in the stores too.  It's a little early for some organics but when you get them at the Farmer's Market you can have a chat with the grower and see what they use to manage their crops.  Right after I picked up some halibut from Mission Fresh Fish, I got some wonderfully sour peaches from Twin Girls Farm and my first thought after tasting them was "salsa."  The cherries are from Hamlow Ranches and although a little tart, still a great start to cherry season.  Golden cauliflower from Balakian Farms finished off the meal.  It's going to be a great summer!

Combine everything in a non-reactive bowl and let sit for at least an hour covered in the fridge.  This will last about 2 days in the refrigerator--but there won't be any left after the first day.

Preheat the oven to 425.  Wash and chop or thickly slice the cauliflower.  Spread on cookie sheet, drizzle with olive oil and sprinkle a little sea salt over everything.   Roast in oven for 10 min. While cauliflower is roasting rinse and pat dry halibut fillets, drizzle with olive oil and season with salt and pepper.  Get a large skillet and over medium high heat, melt the coconut oil until hot.  At the 10 min. mark of your cauliflower, turn over the cauliflower pieces and roast another 10 min.  Start searing your halibut, about 5 min. a side or until it is fully opaque in the center. Cauliflower and halibut should be done at the same time.

The kids loved the combination of the salsa with the fish and even gobbled up all the cauliflower, it was a really nice fish dish!
Posted by Unknown at 9:05 PM No comments: