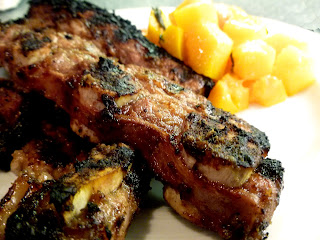 These ribs were on sale last week at the Prather Ranch stand and I've always been curious about them.  Now, as you are most likely aware, "BBQ" usually signifies that the sauce will have tons of sugar.  In fact, when I tried to find a marinade for this a lot of the posts had referenced this one restaurant in Maui called Azeka's (which is no longer in existence) and all the recipes called for at least a cup of sugar.  It makes sense, they grow the stuff all over the place there.  Never having actually been to Hawaii (!) (Ahem! Ahem! STEVE!) I was a little stumped.  Then I typed in "maui ribs paleo" into my little search engine that could and up popped this great recipe from Mark's Daily Apple.  Check out his recipe, he has a lot of great pictures and an explanation of the cut of the meat.  He got it by holding a contest and this guy, Christian Chun, really came up with a great marinade.  Mark also offers an alternative using blackberries but since they are not in season right now, we'll have to wait a bit to try it that way.  What ARE available now are kiwis from California and although while there are  Asian pears out there in the farmer's market, I used a pippin apple and a pink lady with fantastic results.  I found the pippin at Good Earth Natural Foods and the pink lady is all over the place still.  If you can't find a pippin, try the honey crisp.

That's roasted butternut squash with sage in the background.  425 oven, cut squash in half, remove skin and seeds.  Cut squash into chunks, drizzle with olive oil, sprinkle with sea salt and fresh sage.  Roast for 20 min. turning at the halfway mark.

2 pounds beef short ribs. For Korean short ribs, “flanken-style” is the preferred cut. Flanken-style ribs are about 1/2-inch thick and contain three rib bones. This marinade can also be used with other types of beef, such as 1/2-inch thick sirloin steaks.

Pour the marinade over meat into a Ziploc bag, an air-tight container or a bowl wrapped tightly with plastic wrap. Make sure the meat is completely covered with the marinade.  Move it around every once in a while to make sure this happens.  Refrigerate for at least 4 hours and up to overnight.  I let mine go for 2 days, you can go for as long as 4 days...

Grill ribs four minutes on each side for rare and a minute or two longer for medium rare. The ribs can also be cooked under a broiler, but might take 3-5 minutes longer to cook.