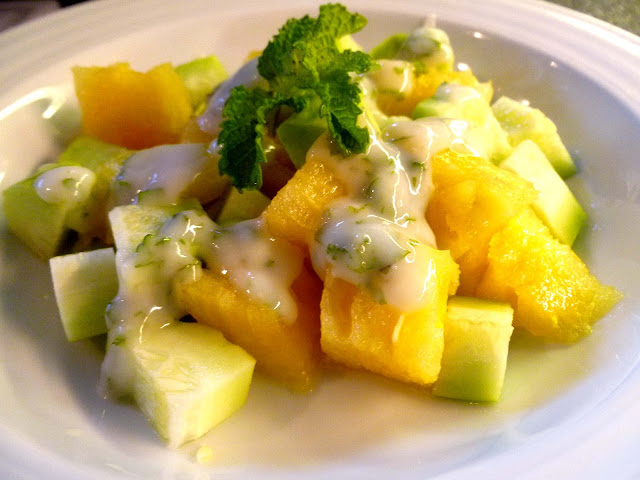 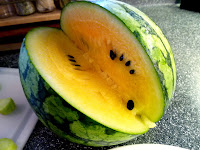 A few days ago I made a plain cucumber salad using coconut milk yogurt and though Steve and Sophia liked it well enough, I felt the coconut yogurt was not sour enough for what I was expecting to taste.  I had to think about it.  I really wanted to make the coconut yogurt thing work but used in this traditional sense it just wasn't doing it for me. Yesterday morning I was at the Farmer's Market and Full Belly had a nice selection of melons.  I asked about this smaller one, I had a feeling it was a yellow-flesh , and was told it was beautifully sweet and very refreshing as most watermelons tend to be.  Then, Balakian Farms had some nice Armenian cucumbers and I was all set.  I really like buying from Balakian, their pricing is simple and their produce is consistently excellent. The dressing is straightforward, but do prep it early in the day as it takes a few hours to "cure".

Peel and crush the garlic cloves with the flat side of a chef's knife.  Stir into yogurt and store in refrigerator for at least 2 hours.  Before dressing salad, stir in fresh mint. (This will keep the mint bright green if you are in to aesthetics, it will brown fairly quickly though not affecting taste) 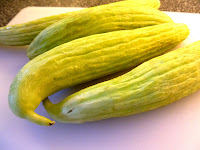 Wash and chop the cucumber (no need to peel these!) and watermelon in to desired chunks/sizes.  Drizzle yogurt dressing to taste.  Seriously.  It can not be any easier.