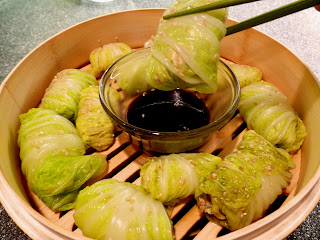 I ripped this recipe off almost to the letter from Jamie Oliver's book Jamie's Kitchen. I know this doesn't look like much, but I think because of the cabbage, everyone got full pretty quick.  It was a GREAT excuse to go out and get a Bamboo Steamer (I got mine at Sur La Table.) I think the kids got about 4 or 5 in and they were done.  I had a fair amount of filling left over too, so I cooked them off as patties then crumbled them into a stir-fried brown rice with one egg scrambled and some peas thrown in for lunch for the kids the next day. There's a lot going on in these little packets of goodness:

Chinese Chicken Parcels
1-2 Savoy or Chinese (Napa) Cabbage (There's a lot of "Green Cabbage" out there right now--hold out for the Savoy--the ones pictures were done with the Napa cabbage and I needed 2 of them but I think these would be even better with the Savoy)
2 cloves garlic, peeled (Full Belly Farm)
1 thumb-sized piece of fresh ginger, peeled (it's from Hawaii for now at Whole Foods, but will be from S. American countries soon)
1 bunch scallions trimmed (Cal-Organic from Whole Foods)
1 handful fresh cilantro (Star Route Farms)
1-2 fresh red chillies (Had to go to Asian Market to get these--Whole Foods had none)
1 TBSP. fish sauce (Thai Kitchen brand)
Sea Salt (Maldon or Fleur du Sel or Himalayan)
4 trimmed boneless, skinless chicken thighs roughly chopped (I used Mary's Organic Air Chilled from the pre-pack at Whole Foods)
1 handful of water chestnuts (get ones that have the least additives!)
zest and juice of 2 limes (Blue Heron Farm)
1 tsp. sesame oil (Spectrum Organic)
Extra Virgin Olive Oil (Bariani)
Bragg's Liquid Aminos
1 TBSP toasted sesame seeds

Remove and discard the core and outer leaves from the cabbage, undo the remaining cabbage leaves and place them in a pan of salted boiling water for 2 minutes to soften.  Cool them in a bowl of cold water, drain and put to one side.

In a food processor, pulse up the garlic, ginger, scallions, cilantro, chilli, and fish sauce with a good pinch of salt.  Then add the chicken, water chestnuts, lime zest and juice, and sesame oil and pulse until you have a ground-meat consistency.

Place a heaped teaspoon of the flavored chicken on to the stem end of the leaf and roll it up into a secure package, tucking the sides in as you would a burrito.  Rub the bamboo steamer, colander or normal steamer with a little olive oil and place in the cabbage parcels seam side down so they don't unravel.  When the steamer is packed, place it over a pan of boiling water, making sure the water doesn't touch the parcels and that it's just the steam that's cooking them.   Put a lid on top and steam from 6-8 min, until cooked--check one by cutting open and making sure chicken is cooked through.  I served ours by dipping in the liquid aminos and sprinkling on the sesame seeds.  You can also serve with Chili Garlic Sauce which has a kick to it, so maybe not so much for the kids.