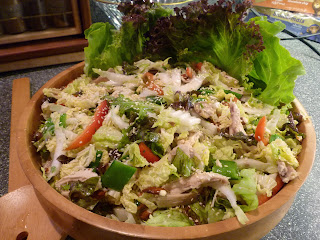 I struck out trying to find organic napa cabbage and red bell pepper from California today at Whole Foods, but got lucky at Paradise Foods.  They had both so game on!


Chinese Chicken Salad:
Don't buy bottled dressing, they always use canola oil and put way too much sugar in it.  Salad dressing can be an excellent way to get the right fats into your diet.  In fact, tonight, I skipped the honey and Bragg's Liquid Amino's and added lemon juice--it came out great!

4 Tbsp Rice Vinegar
2 Tbsp. Bragg's Liquid Amino's (takes the place of soy sauce)
2 tsp. fresh grated ginger
2 tsp. toasted sesame oil
2 tsp. green onion/chives finely chopped
1 clove garlic, peeled and mashed
1 tsp. raw honey (I use even less than that, more like 1/4 tsp.--Rob Berkemeier's honey is nice from Santa Rosa at the Civic Center market, his pricing is fair and the honey is wonderful, he typically sets up across from the food trucks at the back of the market)
2/3 c. EV olive oil (I like my dressing more acidic so I use a little less)
2 tsp. expeller-pressed flax oil

Put in a jar and shake.  You may use the whole jar for this salad, if not, keep in the jar on the counter--it will last a couple of days.  I'll probably use it as a marinade.

Toast sesame seeds on heavy bottom skillet on stove top at medium heat.  Give them a shake every couple of minutes until they turn golden.  Set aside to cool.

Cook snow peas in a 4-quart pot of boiling salted water until crisp-tender, about 1 1/2 minutes. Transfer with a slotted spoon to a bowl of ice and cold water to stop cooking, then drain in a colander and pat dry. Cut diagonally into 1-inch-wide pieces and put in a large bowl with cabbage and romaine.